Miroslav Šašek was born on 18th November 1916 in the Prague district of Žižkov. His mother, Anna Marie (née Nováková), born on 17th January 1886, was the daughter of a postal clerk. She had studied typing and shorthand at secretarial school and then worked as a correspondence clerk. On 19th September 1915 she married accountant Alois Šašek, who was born on 18th June 1885 into an ancient family of millers that since 1605 had owned (and in fact still owns) the celebrated Lucký Watermill near Chodovlice in central Bohemia. 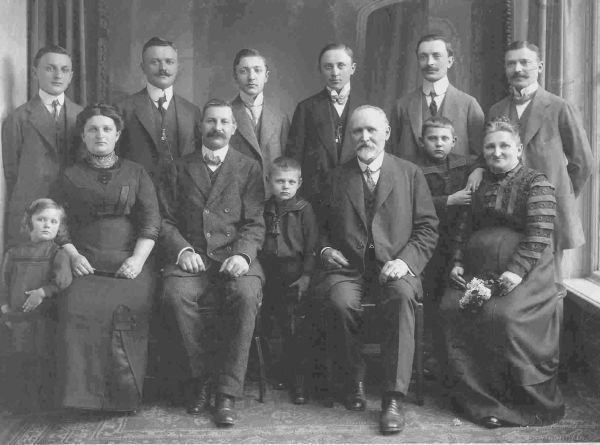 On 15th October 1926, at the age of just 41, Alois Šašek died in Sedlčany, where he had been working as the manager of an insurance office. Anna Marie now remained alone with two children, the ten-year-old Miroslav and his six-year-old sister Věra, and she returned with them to Prague. In Sedlčany Miroslav attended local primary school, where at the end of his fifth year of study (1926-27) he gained grades one – the highest on the scale – in all subjects. At the grammar school he subsequently attended in Prague’s ninth district his results were not quite so outstanding; among the twos and threes his seventh-year school report (from the academic year 1935-36) contains just a single grade one – for drawing. 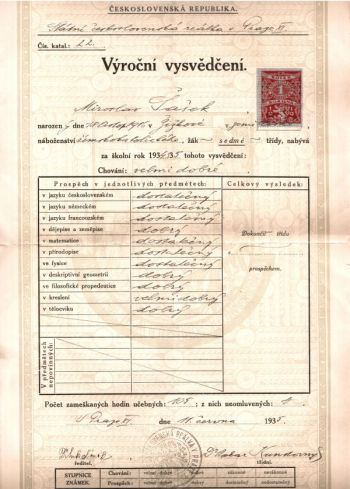 After leaving grammar school Miroslav Šašek studied at the Czech Technical University in Prague, graduating from the school of architecture and the school of drawing and painting, where his teacher was the Czech landscape painter Oldřich Blažíček. During the years 1938 and 1939 he undertook study trips to France, Germany, Belgium, Holland, and England and Scotland, and from February to September 1939 he worked as a transportation clerk for the Czech branch of the Wagon-lits/Cook travel agency. In the 1930s and 1940s he illustrated a large number of children’s books published by Melantrich as well as by the publishing houses of Ladislav Kuncíř and Josef Doležal, e.g. Hiršal’s Little Red Riding Hood, Eduard Petiška’s Seven Boors and his own tale Benjamin and the Thousand Sea Dragons of Captain Barnabas, and from the world of adult literature an edition of Jaroslav Hašek’s The Good Soldier Švejk and Gabriel Chevallier’s Clochemerle. Šašek drew humorous cartoons and caricatures for the newspapers Free Speech, Czech Word and Evening News; he was a permanent contributor to ‘Kvítko’ (‘Little blossom’), the Sunday supplement of Czech Word; and e was a graphic editor for several weeklies. After the war he and his first wife, Jindřiška (known as ‘Dynda’), resided for a short time in the north Bohemian town of Jablonec, where together they designed and produced puppets.In 1947 the Šašeks moved to Paris, where Miroslav began his studies at the École des Beaux Arts. He also had plans to produce an illustrated guidebook to the city for publication by Ladislav Kuncíř, although this project did not progress beyond the preparatory stages. After February 1948 he made the decision to emigrate and spent three years working as a graphic artist and architect in Paris, and in 1951 playwright and theatre director Jan Snížek brought him to Radio Free Europe, where at first he was taken on as a production assistant but then almost overnight turned into presenter, actor, narrator and singer. He was joined in Munich and at Free Europe by Dynda, who also directed a number of radio programmes. 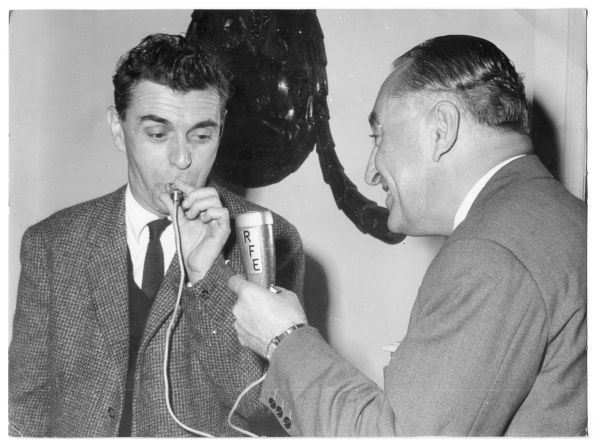 Following his divorce from Dynda, Miroslav Šašek spent several months at the home of philanthropist Ladislav Čerych and his family in Bruges. In the autumn of 1957 he left Free Europe, returned to Paris and resumed work on his projected guidebook for children.
This is Paris, both authored and illustrated by Šašek, was published first by Allen in London and soon afterwards by Macmillan in New York. It was followed by similar books on London, Rome, New York, Edinburgh, Munich, Venice, San Francisco, Israel, Cape Canaveral, Ireland, Hong Kong, Greece, Texas, the United Nations, Washington D.C., Australia and historical Britain. Plans for further books on Bombay, Delhi (offered by Air India), Bermuda, Canada (at the suggestion of Canadian Pacific), Rio de Janeiro, Copenhagen, Stockholm, Vienna, Amsterdam and various other locations did not come to fruition. 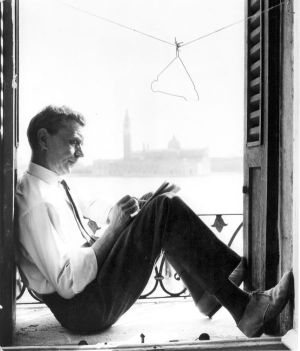 The titles from the This is... series have been translated into many languages and published in print runs of tens of thousands in France, Italy, Germany, Spain, South America, Japan and Scandinavia. At one time This is New York was selling at the rate of up to 600 copies per day. The books have earned their author a number of awards and other forms of recognition including, for example, the Key to the City of San Francisco and an entry in the IBBY (International Board on Books for Young People) Honour List for 1979.

Honorary Key to the City of San Francisco

Four of the This is... books (New York, Israel, Venice and Ireland) have been made into films, and Šašek’s illustrations have appeared on postcards, posters and numerous other items. Besides these illustrated guides to cities and countries Šašek also published two other books featuring his own words and pictures: Stone is not Cold (New York, 1961) and Mike and the Modelmakers (London, 1970), as well as illustrations for a number of titles by other authors. 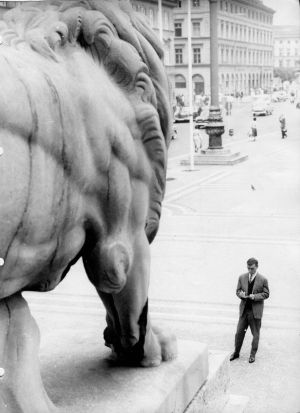 In the 1960s Šašek regularly penned feuilletons and notes from his travels around the world and recorded them for Radio Free Europe. In 1961 he married Anna Molková, who at that time was working at Free Europe as a presenter under the professional name Anka Dušanová. Anna and her son Pedro Dušan were now the family he came home to on his numerous returns to Munich, although this marriage, too, was to last only ten years, the couple divorcing in 1971.
During the last fifteen years of his life Miroslav Šašek organized a number of exhibitions of his own works in Germany, Switzerland, Great Britain, Australia and the USA.
He died on 28th May 1980 in Wettingem, near Zurich, at the home of his sister, Věra. 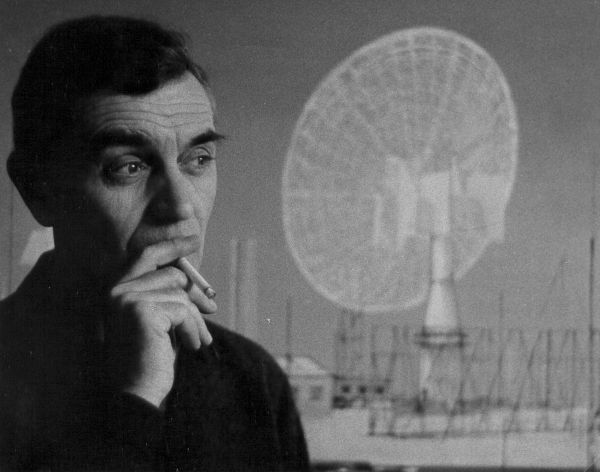